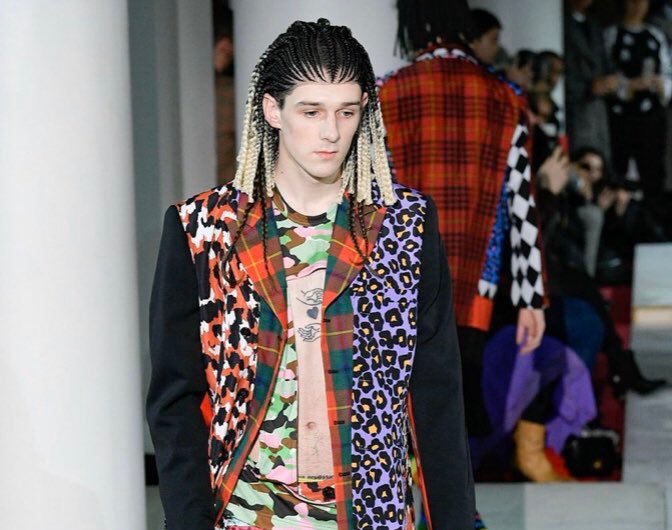 “There’s no such thing as a bad publicity” is what those in charge of the AW 2020 Commes des Garçons runway show probably thought when they had the brilliant idea to culturally provoke with the styling of their models at the Men’s Fashion Week in Paris. In this case, however, it is no longer a question of publicity, but rather of weighing up whether the brand has a fundamental racism problem. After all, this is not the first time that the brand has attracted negative attention in this context. But what actually happened in detail?

At the presentation of its current men’s collection this week in Paris, Japanese fashion brand Commes des Garçons showed white models with oversized lace front wigs reminiscent of cornrows. The critics were not long in coming and quickly called for cultural appropriation of the brand in the social media. They were disturbed not only by the choice of the top front wigs, but also by their untidy presentation.

Tolerance has unfortunately still not reached all fashion brands. Many use cultural provocation to polarize and to get into conversation – this is shown by the recent past and numerous similar incidents. Already almost two years ago, Commes des Garçons was confronted with accusations of racism: For more than two decades, the Japanese label had allegedly cast only white models.

At this time, Comme Des Garçons has not released a public statement on the current situation.

Comme Des Garçons hair stylist Julien d’Ys has apologized on Instagram, saying that “it wasn’t his intention to hurt or offend anyone”.

Dear all, My inspiration for the comme des garçons show was Egyptian prince A Look i found truly beautiful and inspirational. A look that was an hommage. Never was it my intention to hurt or offend anyone , ever. If I did I deeply apologize. ❤️ Julien d’Ys